Forex Analysis & Reviews: Overview of the EUR/USD pair. August 17. The first two trading days of the week showed which way traders are looking. 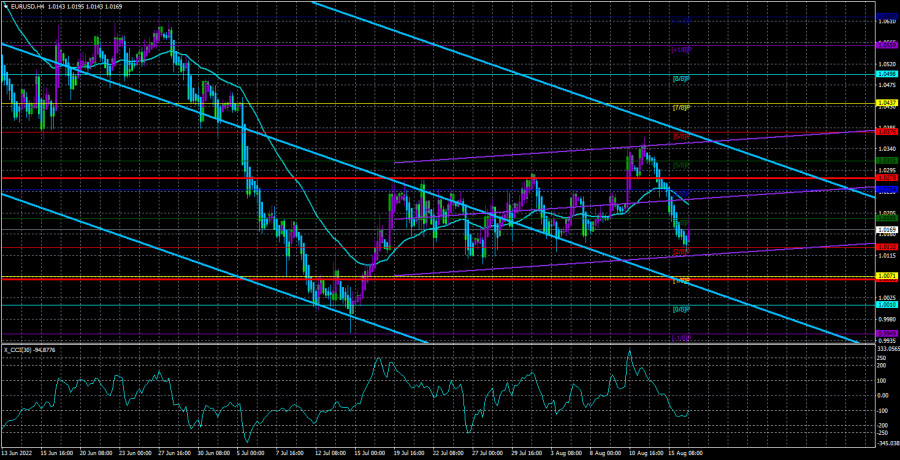 The EUR/USD currency pair continued its slow decline peacefully and calmly on Tuesday. Let's look closely at the illustration; what do we see? Over the past 2.5–3 days, the quotes have decreased by more than 200 points. Over the past four weeks of an upward correction, the euro currency has grown by 400 points. It is all you need to know about the desire of traders to buy and sell euros. At the same time, it should be noted that no single important macroeconomic report was published in the United States or the European Union on Monday and Tuesday. That is, the euro currency was getting cheaper out of the blue. Naturally, this is a joke since it's just that rarely anything happens in the foreign exchange market. We just wanted to draw the attention of traders to the fact with what strain the pair has been growing in the last month and how easily it has been falling in the last 2-3 days when there was not even a good reason for this. We believe this moment very eloquently indicates the resumption of the global downward trend, which has lasted for more than a year and a half.

Once again, we have to note that the US dollar has been growing and may continue to grow mainly based on fundamental and geopolitical factors. The "foundation" has not changed for a very long time. More precisely, the euro currency only worsens because the Fed rate continues to rise, and the ECB rate continues to "pretend that it is growing." A quantitative tightening program has begun in the United States, and new conversations have started in the European Union about concerns about a possible recession. Last week, after the inflation report, we admitted that the market may have already worked out all the factors of the dollar's growth, but now it is clear that this is not the case. These factors remain relevant and may lead to several more updates of the pair's 20-year lows in 2022. We would say that it will be possible to expect the end of the downward trend not earlier than the moment when the Fed stops raising the rate.

Reports on GDP and inflation very quickly lost their value and significance.

Yesterday, we drew traders' attention to the macroeconomic statistics that may affect the movement of the euro/dollar pair this week. In particular, we highlighted the European reports on GDP and inflation. It is already possible to take these words back since the European currency on Monday and Tuesday showed in which direction it will move in the near future. The GDP report, which will be published today, is only the second estimate of the indicator for the second quarter. That is, it is unlikely that it will differ much from the first estimate, and traders are unlikely to react to it. The inflation report will be more significant for the market, but it is now so easily predictable that it remains unclear on what basis traders will have to be impressed and react to this data.

Inflation in the European Union has been growing continuously for more than a year. There was only one month when the consumer price index did not increase compared to the previous month. Therefore, tomorrow we will likely see an increase to 8,9-9%, and that's it. Even an increase in the ECB's key rate does not play a special role in inflation since one increase cannot stop the acceleration of price growth. And the acceleration of inflation does not play a special role for the ECB because the regulator has been inactive for the last year and has not yet shown any signs that it will fight rising prices with all available means. Therefore, inflation will increase by another 0.3-0.4%, but this will not mean an increase in the likelihood of a more serious tightening of monetary policy at the next meeting. The ECB will most likely raise the key duty rate so that no one can accuse it of inaction. For the euro currency, such a picture and prospect remains disappointing. But nothing can be done about it, and we are again faced with a situation where all the factors are against the euro. 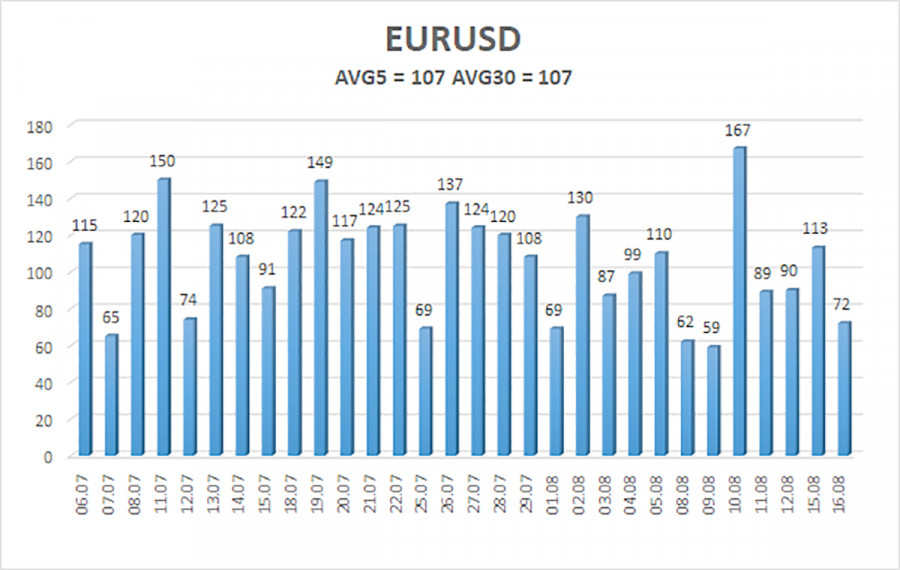 The average volatility of the euro/dollar currency pair over the last 5 trading days as of August 17 is 107 points and is characterized as "high." Thus, we expect the pair to move today between 1.0065 and 1.0278. The upward reversal of the Heiken Ashi indicator signals a round of upward correction.

Explanations of the illustrations:

Linear regression channels – help determine the current trend. If both are directed in the same direction, then the trend is strong.

Moving average line (settings 20.0, smoothed) – determines the short-term trend and the direction in which trading should be conducted now.

Murray levels are target levels for movements and corrections.

Volatility levels (red lines) are the likely price channel in which the pair will spend the next day, based on current volatility indicators.

The CCI indicator – its entry into the oversold area (below -250) or into the overbought area (above +250) means that a trend reversal in the opposite direction is approaching.