Forex Analysis & Reviews: What will stop the bulls?

Financial conditions have tightened over the past three weeks: stocks have fallen, corporate yield spreads have widened, and mortgage rates have risen to nearly 14-year highs. Could the Federal Reserve take this as a signal to loosen its grip, or are we in for further tightening of monetary policy? Let's figure it out.

What will stop the bulls? 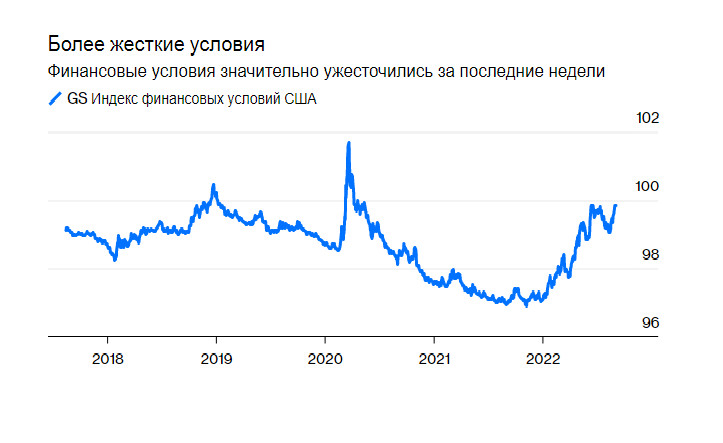 The S&P 500 index is now 14 trading days and 9.2% in its fifth mini-drawdown of the year. The first four drops lasted from 10 to 36 trading days and decreased by 9-16% of the benchmark value from peak to low. Thus, this decline is already in the range in which a short-term reversal is possible, if not inevitable. Obviously, traders will want to redeem this failure.

Unfortunately, now this situation is such that either the bulls will retreat from the market, or the Fed will have to introduce a new interest rate threshold in order to dampen inflation. Will traders stir up a hornet's nest before the Fed's policy meeting on September 20-21?

Financial market indicators track not only stocks, but stocks were the most visible source of defiance while the Fed was trying to curb demand to tame the highest inflation rates in four decades.

Monetary policy works partly through financial markets, because the combination of higher borrowing costs and lower asset prices makes consumers and businesses less likely to spend, so these two institutions are tightly linked to each other. And although the Fed does not directly focus on financial conditions, the members of the Federal Open Market Committee, who set interest rates, closely monitor them, using the behavior of Wall Street as a kind of litmus test. And so far, the mood of FOMC members clearly indicates that they are unable to curb the markets.

So, the president of the Federal Reserve Bank of Minneapolis, Neil Kashkari, said that he was not thrilled that the stock market was growing after the FOMC's last meeting.

Recently, conditions have been developing in the direction desired by the US central bank, which was facilitated by a push from Fed Chairman Jerome Powell.

In his speech on August 26 in Jackson Hole, Wyoming, he opposed most of the bullish narratives that supported risky assets, arguing that even with the slowing economy, the central bank does not intend to cut rates in the near future. Federal funds futures now imply that the central bank will raise the upper bound of the target rate to 4% by February. This is a major additive at the current level of 2.50%. So even if he starts to change course, he can only cut rates by a paltry 25 basis points in 2023.

As for this month, the debate is focused on whether the Fed will raise rates by 50 basis points or 75 basis points. Futures suggest a three-quarters probability that the central bank will choose the latter.

There is an important point in this game. Whether the Fed has tightened monetary policy enough depends on how you understand financial conditions.

The GS Goldman Sachs Group Inc. US Financial Conditions Index returned to the lowest levels of the year, helped by an increase in the yield of 10-year Treasury bonds. On the other hand, the Bloomberg US Financial Conditions Index has tightened, but remains much weaker than at the beginning of July. The Goldman Sachs Index gives significant weight to 10-year bond yields, while the Bloomberg Index focuses on credit spreads and attaches more importance to equity-related components. In any case, the Fed should like the trajectory.

These are mainly technical factors that can attract equity investors and potentially facilitate Powell's decision. In other words, the stock has fallen so much that there will definitely be short sellers who do not want to risk their profits, and traders with fast money who see profitable deals. This creates the conditions for a new wave of sell-offs and demand, although it will not necessarily be a problem for the Fed, unless everything snowballs, as it did in July and August, and real money begins to perceive the rally as something longer.

What factors should I pay attention to?

The 14-day relative strength index — a handy momentum indicator that signals when assets and indices may be "overbought" or "oversold" — is approaching the key level of 30, indicating the latter.

The S&P 500 has a "key support level" of around 3,900, as Bloomberg Intelligence chief strategist Gina Martin Adams and senior associate analyst Gillian Wolfe pointed out on Friday. (This means that trading patterns suggest that some investors considered these levels a good buy at the beginning of the year, so perhaps they will return to this field again).

The CBOE stock put/call ratio, reflecting the ratio of bearish bets in the options market to bullish, returned to its highest level since June. Taken as an opposite indicator indicating that the market is at the bottom, this ratio indicates to some people that the gloom is exaggerated and a reversal may be close.

You can believe these signals or not, but many market participants believe, which makes them a signal for predicting a short-term rebound. And of the macroeconomic indicators that can convince the bulls, there is not so much top-level fundamental data for trading - until the decisive release of the consumer price index on September 13. S&P 500 earnings per share increased by 10% to $212, but there won't be much change.

In general, a lot comes down to moods and a factor that is even more difficult to predict — recklessness. Perhaps only now I am beginning to understand the whole humor of the situation: bulls will buy as long as they have money. And they have money thanks to two years of credit thaw from the Fed. And although many have already been shaken up, it seems that retail investors have decided to act according to a simple scheme: laying down the risk of a Fed rate hike in advance, they plan the next failure... and they buy it back. There is one big disadvantage in this scheme. The base rate affects the cost of the loan. And even if the bulls are now managed solely by their stocks, which is unlikely, the real sector may be unable to borrow at a huge interest rate.

And now I wonder: maybe the real crisis has not yet come? While businesses and individuals are able to do without loans (and social payments related to the repayment of the difference in the cost of electricity allow this to some extent), it is possible that we have not even entered the acute phase yet. And only when own funds really become scarce, in other words, when currencies depreciate even more, then it can be considered a crisis.

But will it happen? Even if inflation slowly starts to slow down? Of course, a further slowdown in inflation could help tip the scales in favor of a 50 basis point rate hike, but I think the question needs to be put more globally. Ultimately, if the bulls still have enough money, does this mean that they can continue to "donate" the real sector by investing in stocks? Not at all necessary. But there doesn't seem to be a way to avoid this. Earned and accumulated funds burn the hands of the bulls, forcing them to enter the market with new interventions. And until this money runs out, we will be in a situation of swinging the scales between the Fed and the bulls.